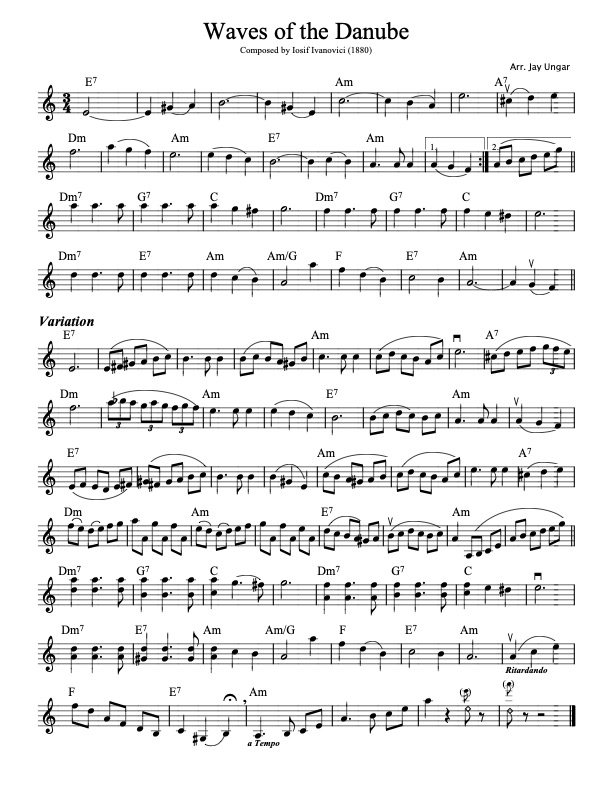 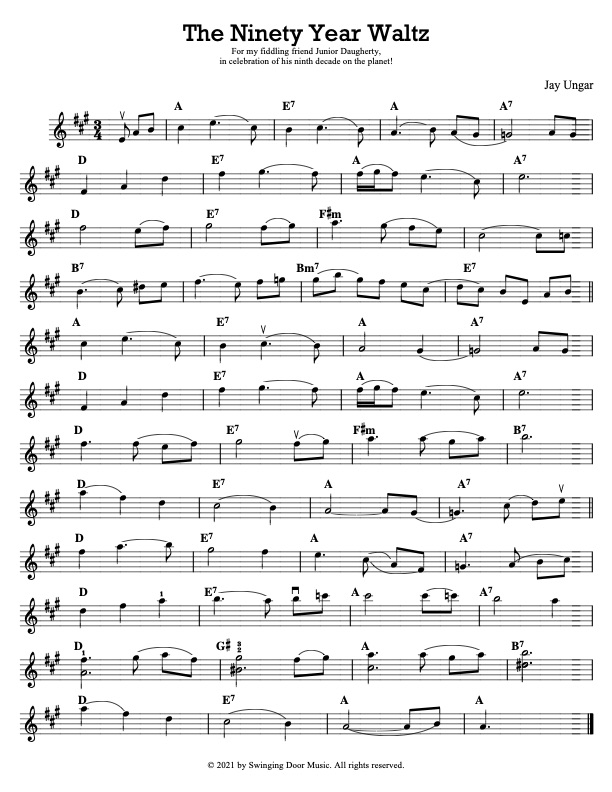 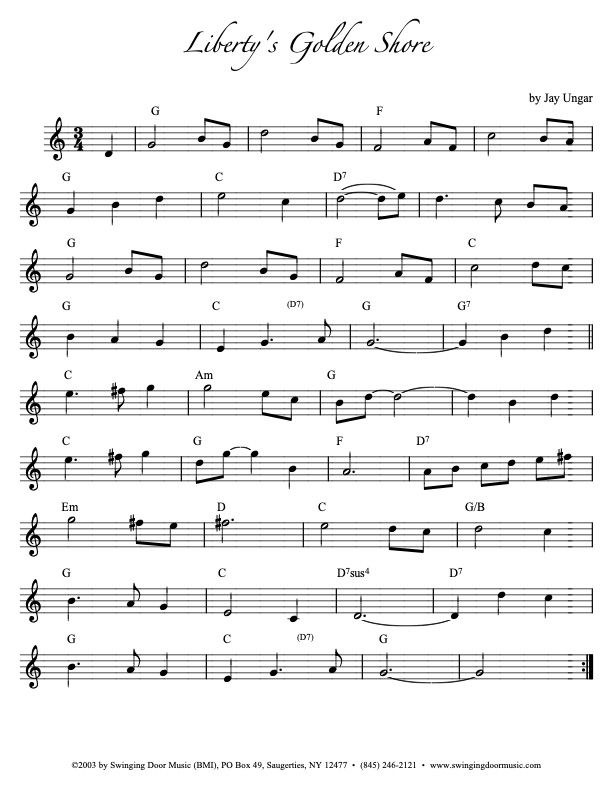 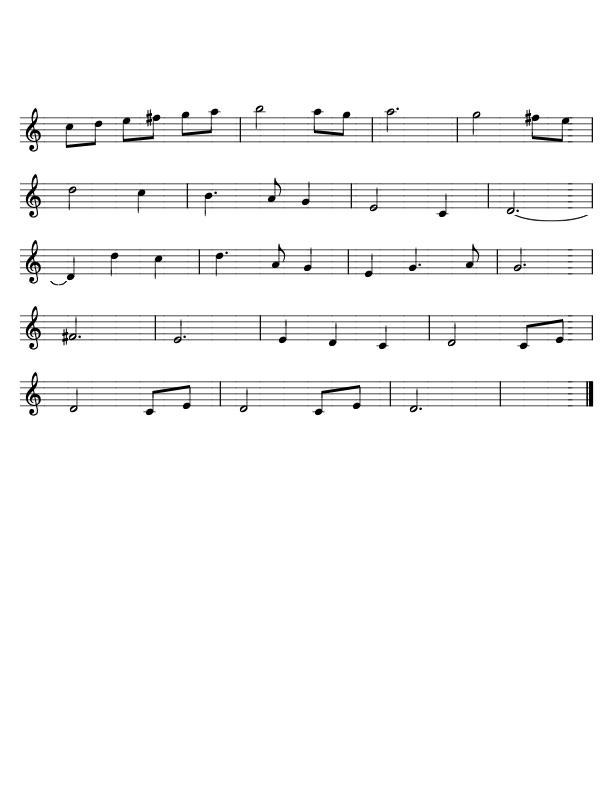 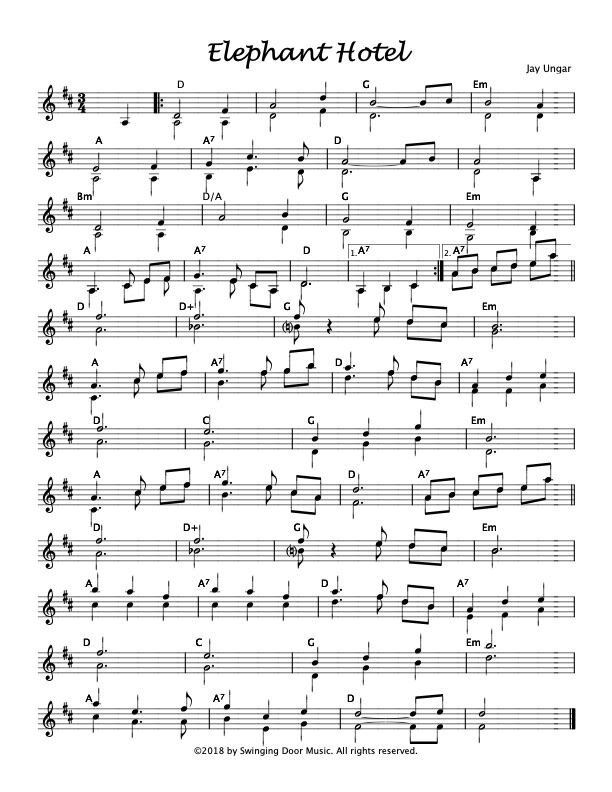 Click here to download PDF
In 1808 in Somers, New York, Hachaliah Bailey (great name!) purchased an elephant named, Old Bet, as the main attraction of his traveling menagerie. He eventually teamed up with P.T. Barnum and the Barnum and Bailey Circus was born. I spent childhood summers and about 20 years of my “adult” life in Somers, about 45 minutes north of New York City. I’ve always been fascinated by this story and the monument to Old Bet that still stands near the Elephant Hotel in Somers.

The waltz, “Elephant Hotel,” was my attempt to emulate “ Westphalia Waltz,” which has always been one of my favorites to play for dancers. The inherent rhythm of the melody is so “danceable.” When playing “Elephant Hotel,” think about providing lift when you play the pickups leading into the first three bars in the first three lines of the A-part.

I bow this tune freely using a variety of patterns suggested by the music and the moment, so I haven’t added any in print here—have fun with that. I did add a harmony line that can be played by a second fiddle, or other instrument. All of the harmony notes are potential double stops that could be played by one fiddler, but I tend to play some, not all. Experiment and do your own thing.

In the B-part, I lift my bow leaving a “breath,” after the short F# in the third bar of lines one and five. Visualize a graceful dancing pachyderm swaying to the music and pausing mid-sway with a leg in the air—a nod to Old Bet and my old hometown.

We offer this simple tune to provide a moment of rest and restoration and then return to the real work of making “liberty and justice for all” a reality. 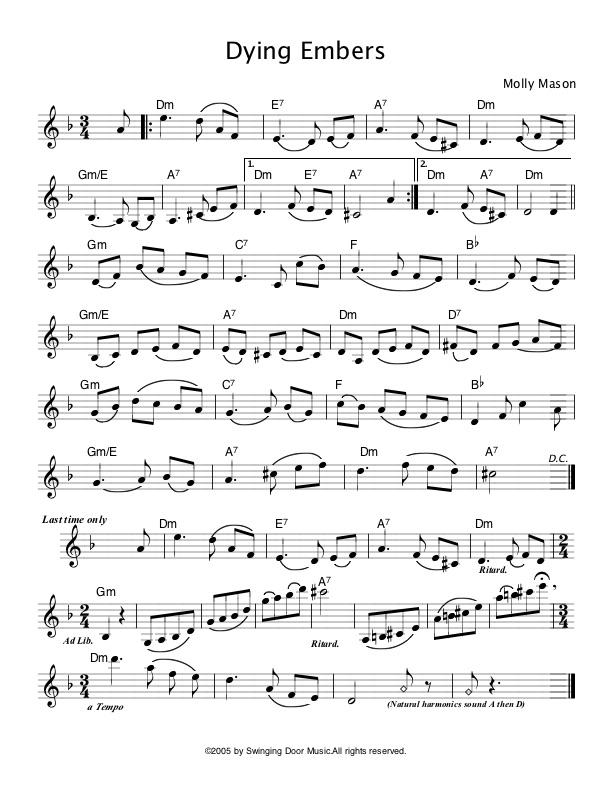 This beautiful Eastern European sounding waltz was written by my wife Molly Mason. It seems the perfect tune to offer with the approach of winter. It’s dark and moody, yet has a very danceable, lilting rhythm. The title, “Dying Embers,” is emblematic of the longer nights, the shorter days and the first fires in our woodstove. But with our family, Ruth, Mike, Will and Opal Merenda, currently on tour in Australia, I think of readers in the Southern hemisphere. In that part of the globe, “Dying Embers,” may conjure thoughts of the last fires of winter, as spring begins to green the landscape. For many Northerners that may sound inviting right about now, but Molly and I so love the warm glow and radiant heat of our woodstove.

This tune uses the repeating rhythmic figure of a dotted quarter followed by three eighth notes in all but the last bar of each phrase. I like to vary my choice of bowings from bar to bar to provide subtle rhythmic variations without actual changing the rhythmic pattern. Rather than using the same bowings every time, I try to let the emotional content and feel of the melody be my guide.

To be able to share my typical bowings with you, I played the tune over and over and wrote down some often used patterns. Try my bowings and once you’ve internalized their logic (or lack thereof?), please feel free to let the tune begin to guide you.

Molly and I like to end “Dying Embers” on an A-part. I’ve added a version of the “schmaltzy” type of ending that we can’t seem to resist. If it doesn’t appeal to you, just skip it and play a final A with the second ending.

If you do venture into our ending and wonder, “what are those last two seemingly wrong, diamond shaped notes?” They’re natural harmonics! By lightly touching the D-string, where the fourth finger is normally placed for an A-note, a bow stroke will produce a high A-harmonic. The same light touch where the third finger G-note is located on the D-string, will produce a D two octaves above the open string. How cool is that?

If you enjoy playing above first position, try playing “Dying Embers” an octave higher. You can visit jayandmolly.com to hear us play it and download a PDF of the two-octave version. We hope that some of you will join us at Ashokan’s New Year’s Camp this winter, where revelers will fiddle, sing and dance in the New Year with waltzes, fiddle tunes, swing, Cajun and Zydeco music.

By the way, 2020 marks the 40th anniversary of Ashokan Music & Dance Camps. We’ll be celebrating this occasion in Ithaca, Boston and New York City during the months of April and May. Visit ashokan.center/donate and scroll down to “Ashokan Always,” to learn more. 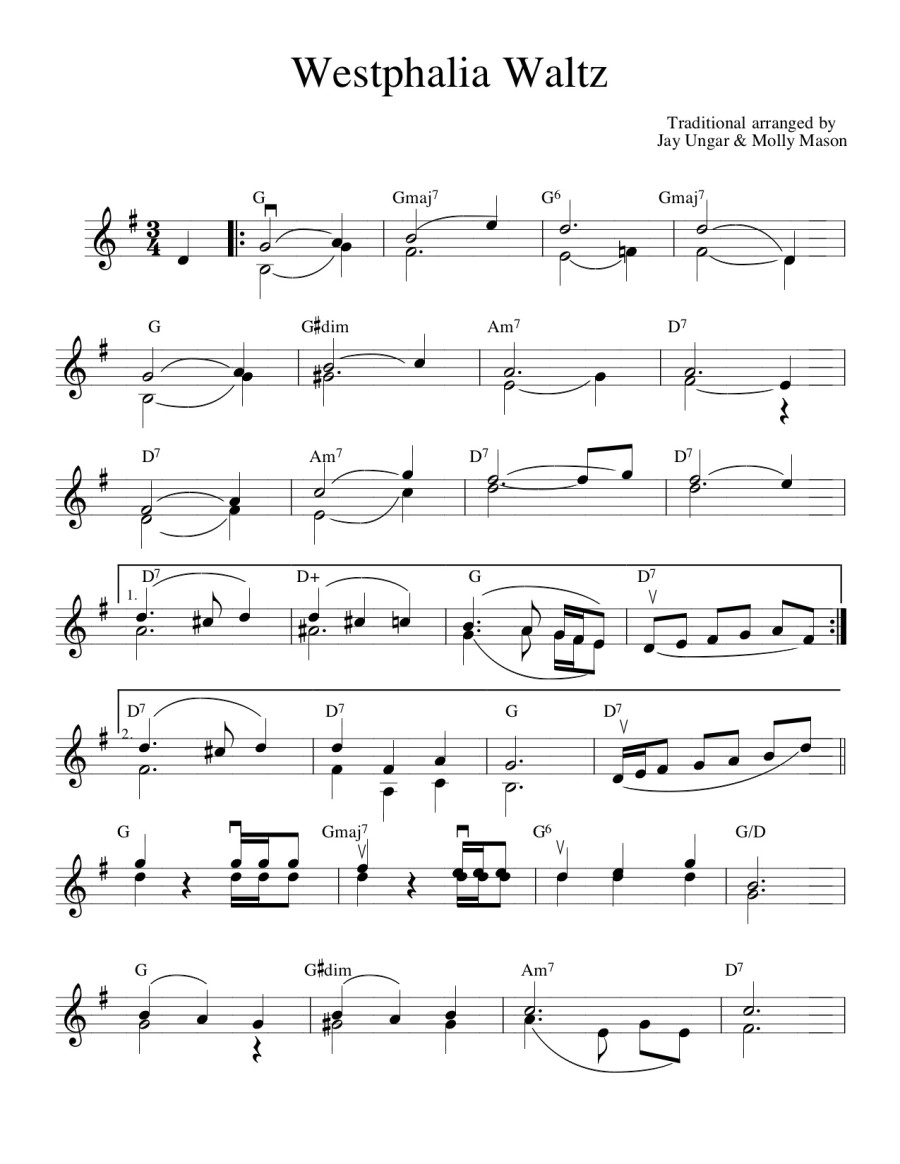 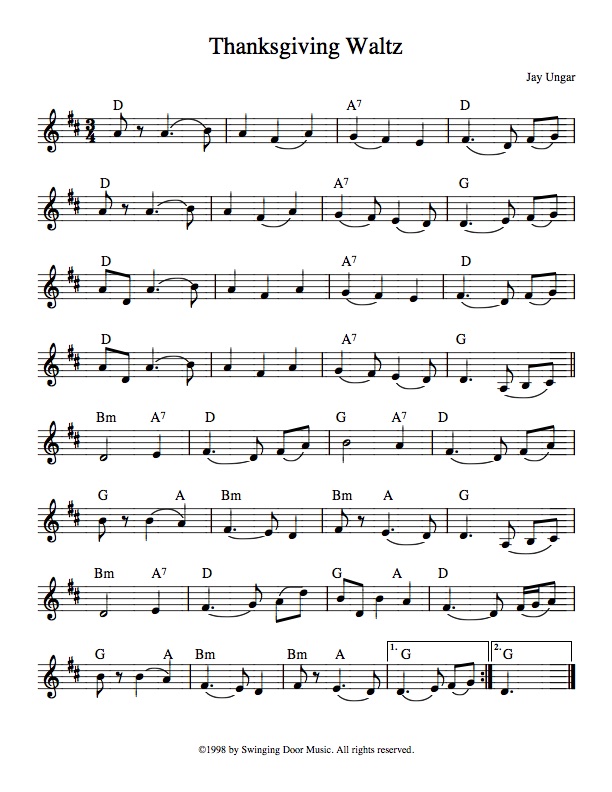 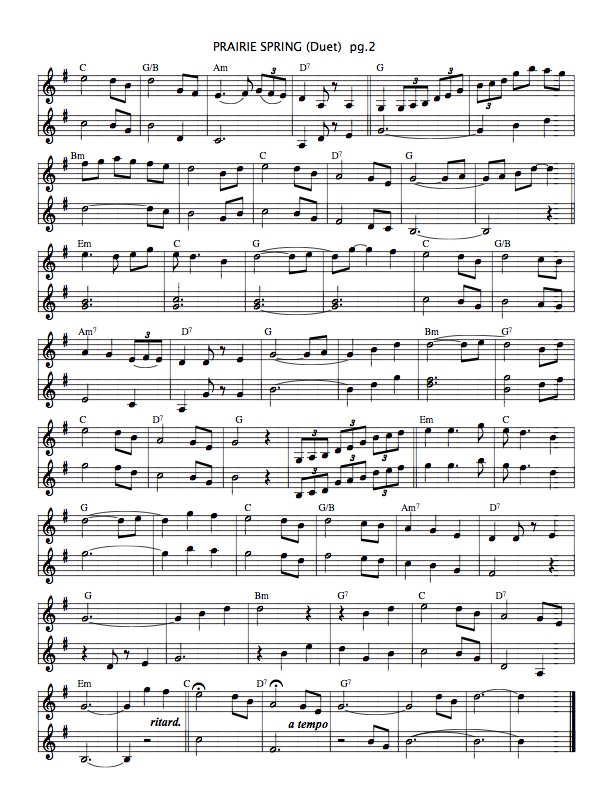 
This tune and more than sixty of Jay & Molly’s other compositions are available in their book, “Catskill Mountain Waltzes & Airs.” Click to also get their CD “Harvest Home” music for all seasons, which includes “Prairie Spring” and other original music recorded by Jay & Molly and friends, plus six tracks with the Nashville Chamber Orchestra. 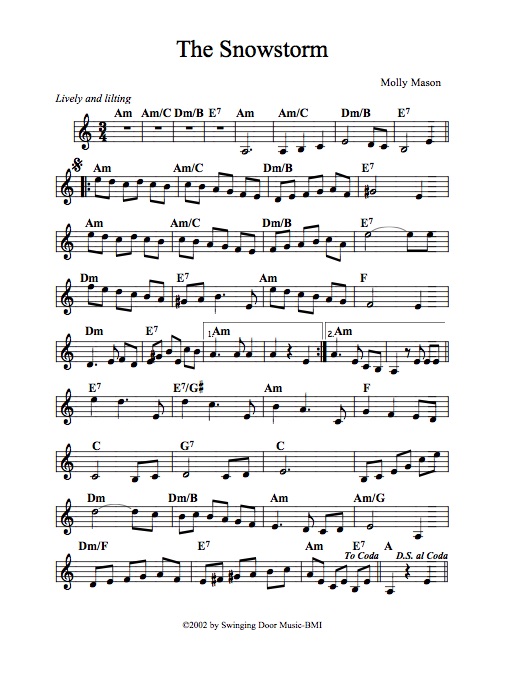 Cradle Song in A: 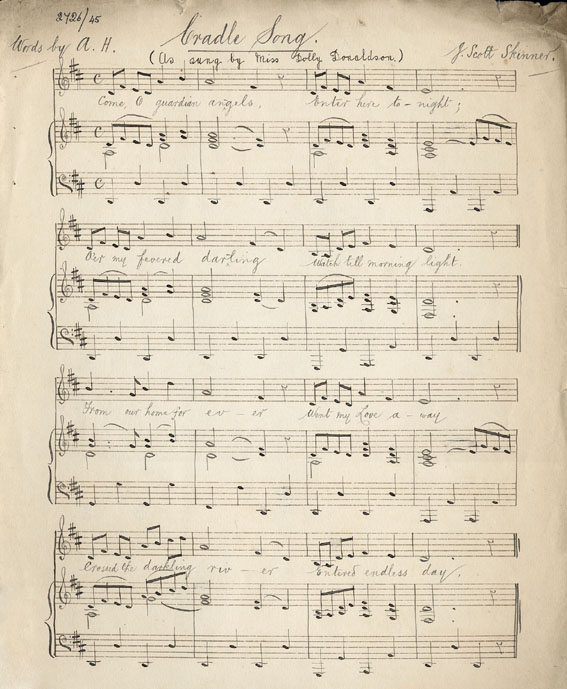 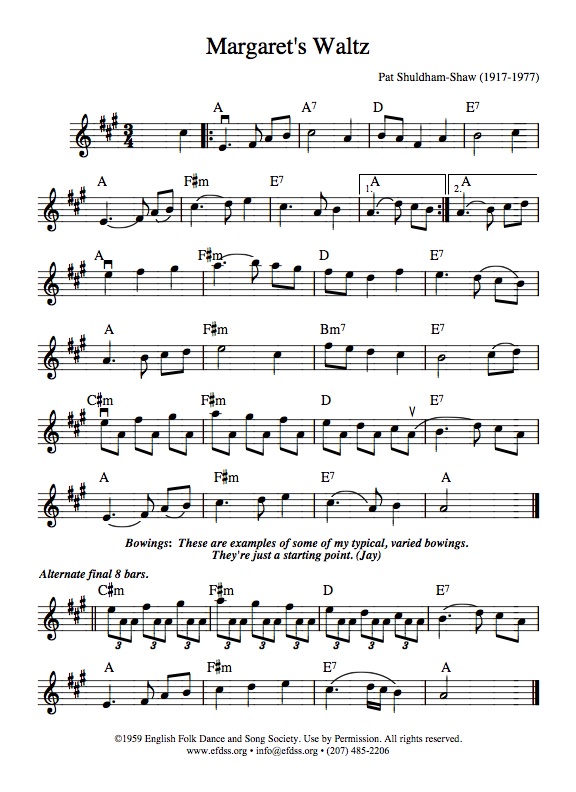